Construction of grain elevators: top facilities in 2019 and outlook for 2019

Silo construction boom is being observed throughout last two years in Ukraine. Large holdings, middle-sized companies and more often small farms rapidly increase their storage capacities. Grain market in Ukraine, despite of some problems, is still one of the most profitable businesses in Ukraine and nobody wants to leave it voluntary.

Incumbent companies increase their land banks and crop yields, and, correspondingly grow their silo facilities to match such an extension. At the same time those thoughtful farmers who have “fattened up” a bit, try to reduce third-parties’ silo services costs and construct their own grain storages.

There is one more category of investors. A few years ago they even didn’t have a thought of dealing with grain, being very far from it. But after seeing the money earned by the industry, they started jumping into this fast moving train. They rapidly purchase land banks, build silos or port terminals.

There is a minority group of those who make investments into silo facilities but don’t possess farming land. They expect to make money from silo services deivery, providing grain handling or processing. But they are still a minority.

Among drivers which facilitated the increase of silo facilities was Ukrzaliznytsya. It made a “magic kick” for almost everyone by its bottleneck in freight and carriage services. If there is no possibility to deliver grain to the port – you have to find a place to store it then. If you need to store the grain – you need to build silos.

As a result, dozens of linear silo facilities and 3 greenfield port silos were built last year. But first things first.

Last year several agriholdings rapidly expanded their silo facilities. Some of them added silos at existing grain elevators, others actively constructed new ones. The most powerful increase of storage capacities was done by Alebor Group of Companies and Astarta-Kyiv. Other companies grew their capacities less rapidly.

Alebor Group of Companies rapidly and simultaneously expanded all its three grain-collecting stations in 2018. The Group has implemented investment program on grain storage capacities increase by 112,6 thousand tons.

There was a new laboratory built and the third scales installed at Khrystynivske Grain-Collecting Station. Also one KBS color sorter with productive capacity of 150 tons per hour was added. Moreover the power capacity of Brice-Baker grain dryer was increased to 3.3 thousand tons per 24 hours at 6 ton-% of moisture removed. Site improvements were performed at this grain-collecting station. 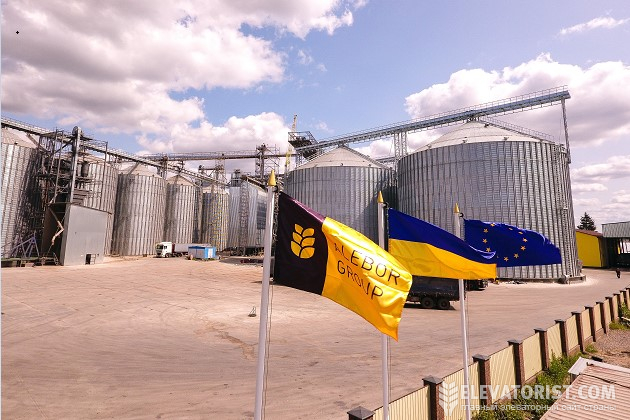 At Chesne Grain-Collecting Station there were 3 flat-bottom silo bins with storage capacity of 5 thousand tons each and 1 operational silo bin with storage capacity of 1.5 thousand tons constructed. Also they built additional automated grain intake point and added one more section to Brice-Baker grain dryer. Now the production capacity of grain dryer increased from 112 tons per hour to 158 tons per hour. One more sampler was installed. Moreover, there were second railway track and locomotive depot built here. Site improvement was also performed at territory of grain-collecting station.

Read on the topic: Birth of grain elevator. New capacities.